Frozen In Concrete: Kansas And The Ice Age 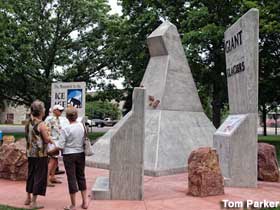 Memorable monuments are sometimes a marriage of a home-grown visionary and a town willing to go along with a crazy idea. And that’s what’s happened in Blue Rapids, Kansas, which on May 19 unveiled its “Monument to the Ice Age.”

Mile-high glaciers are not normally associated with a state known for blistering summers and a billiard table terrain. Blue Rapids, however, owed its soil and its namesake rapids to the scouring power of the Ice Age. The town promoted itself as an Ice Age showplace for the 2009 “Eight Wonders of Kansas Geography” contest — and failed to win any recognition.

“It didn’t have any visual impact; the entry didn’t go anywhere,” said George Callison of the claim-to-fame. “But it triggered something in my mind.” 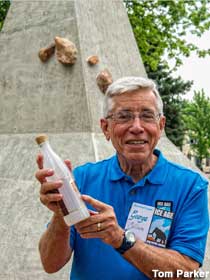 George, born and raised in Blue Rapids, had left town as a teenager in 1958. But he’d kept in touch, and over the years he’d become a professional designer of nature parks and traveling exhibitions. He approached Blue Rapids with the idea for an Ice Age monument, and his experience and local connections won over the town.

“He knows his rocks,” said Tom Parker of the Blue Rapids Historical Society. “It helped that there was no taxpayer money involved,” added George.

The monument looks as unusual as its subject matter. Its centerpiece is an 18-foot-tall, 17-ton concrete “slice of ice” that represents the glacier’s edge. Made of local sand and gravel — another gift from the Ice Age — the pylon has chucks of Sioux Quartzite sticking out of it, a reddish local rock that was actually dragged down to Blue Rapids from Minnesota by the glacier. Another pylon has a button; push it and you’ll hear the Blue Rapids Ice Age story (narrated by George’s daughter) accompanied by synthesizer stings and sound effects of crashing ice and terrified trumpeting mammoths.

The big pylon is lit by a blue spotlight at night, giving it an appropriately icy appearance. 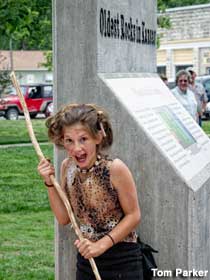 Dedication of the Monument to the Ice Age was accompanied by speeches, a color guard, and local girls dressed as cavewomen. George gave out free bottles of genuine glacier water to the assembled crowd. “It was the talk of the town,” said Tom Parker.

We asked George if the Monument to the Ice Age couldn’t have been built elsewhere in Kansas, or in any one of a dozen other states or hundred other towns. He agreed, but those other towns didn’t have George Callison, and they weren’t Blue Rapids.

Sections: Attraction News, Statues Comments Off on Frozen In Concrete: Kansas And The Ice Age

Monument to the Ice Age

More on Monument to the Ice Age