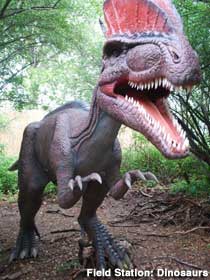 The last time New York City saw a dinosaur — a roadside attraction dinosaur anyway — was in 1965, at the New York World’s Fair.

Now Big Apple residents can see one every day, 90 feet long, standing on a rocky outcrop across the Hudson River in Secaucus, New Jersey.

The behemoth is a long necked Argentinosaurus, part of the prehistoric zoo at Field Station: Dinosaurs. The new, multi-million-dollar attraction is the life’s dream of Guy Gsell, who saw the World’s Fair dinos when he was four years old and has wanted to bring them back to the metro New York area ever since.

Gsell found 20 wooded acres, formerly occupied by an insane asylum, conveniently next to a New Jersey Turnpike exit and New Jersey’s first train station outside of Manhattan. He left the trees and foliage in place, built a three-quarter mile walking trail, added a “base camp” and “dig sites” for authenticity, and then populated this bucolic environment with over 30 life-size prehistoric beasts. 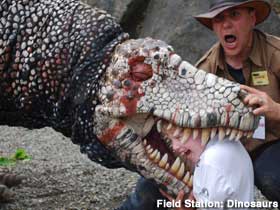 Other dinosaur parks have taken a similar trees-and-monsters approach, but Gsell has augmented his menagerie with motors. All of his creatures move a little, and several are loaded with sensors and facial-recognition software. A Tyrannosaurus rex, for example, lowers its head, sniffs, and growls whenever small children approach, then bellows a cinematic roar when people scream.

The sensitive innards of Gsell’s creatures limits Field Station: Dinosaurs to a seasonal attraction. But anyone wanting a dinosaur fix during the cold winter months can always travel to Glen Rose, Texas, where the New York World’s Fair dinosaurs that inspired Guy Gsell have enjoyed a long second life.