« High Caliber Politics In Kentucky: Hitler Plaque, Assassination Relics | Main | Next Guardian Of The Wonder Tower: It Could Be You » 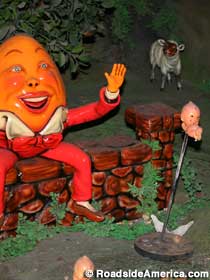 For over 80 years Rock City on Lookout Mountain, Georgia, has been surprising travelers with a mix of engineered/augmented natural beauty — and gnomes. And creepy fairy-tale figures in a one-of-a-kind black light cave.

Nature has a way of taking care of itself, but who tackles the ravages of gnometropy and elven decay?

It turns out that Matthew Dutton does.

Matt has been Rock City’s resident art specialist since 2010. His jobs are many, but his oddest is as the attraction’s one-man repair crew for gnomes and fairyland figures.

“There’s wasn’t anybody in my shop for ten years before I got there,” said Matt of the Rock City building that he’s christened the Gnome Infirmary. 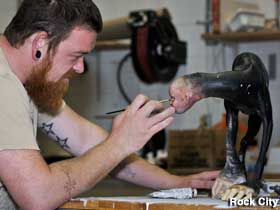 “It was like a vault; things had kinda been left in there to forget.” Luckily, the dusty shop included a big file cabinet packed with ancient Rock City photos, brochures, and postcards. Matt uses these as references in his quest to restore the attraction’s miniature figures to their original splendor.

They needed help. Many are as old as Rock City — which opened in 1932 — and are made of a plaster-like material that soaks up moisture, gets brittle, then makes the statues’ arms and legs fall off. “A figure the size of a baby will weigh, like, 60 pounds,” said Matt. Despite his background in fine art and sculpting, Matt has had to learn on the fly how to retrofit the little creatures, using everything from epoxy to internal ligatures, and always with a lot of sanding and scraping. “Trial and error,” he said. “There wasn’t a gnome repair class.” 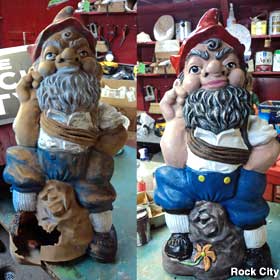 Matt’s greatest challenge lies in restoring the black light inhabitants of Rock City’s Fairyland Caverns and Mother Goose Village, probably the greatest — and oldest — subterranean showcase of UV sculpture on Earth. “Black light is weird, a totally different spectrum of color,” said Matt. “Whenever you bring a Mother Goose character out in the daylight, it just looks horrible. The skin tones are super-super orange, whites are black, blacks are white.”

Fortunately for the artisan, his workshop was outfitted by some long-ago inhabitant to convert to black light at the flick of a switch. “The first time I did that I thought, wow, this place just upped the ante on Creepville,” said Matt. “But it’s super helpful. I have to work under UV to get the colors right; that’s the only way to do it.”

Matt loves his job and is spearheading Rock City’s new Gnome Valley project, which will eventually populate an entire section of the property with gnomes that Matt is creating. “It’s gonna be a long work in progress,” he said. “There’s a lot of room and gnomes aren’t very big.” On his off-hours Matt creates Phigments, creatures that have human baby faces on alien animal bodies. 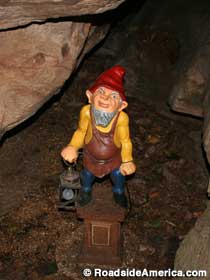 The revival of black light attractions — particularly those with new LED UV lights that really punch up the colors — has spurred Rock City to revive its glow-in-the-dark art, but both Matt and Rock City recognize that Fairyland Caverns and Mother Goose Village may need some historical context — perhaps conveyed with helpful signs — to keep it from alarming the public.

“You’ve got a generation that’s into Japanimation, a totally different cartoon aesthetic,” said Matt. “Maybe back in the day these figures weren’t creepy at all, but now they’re so out of the norm. You want to preserve what’s there, but at the same time you don’t want freak people out. You want to say, ‘These were all intentionally like this,’ not, ‘We’re crazy.'”

1400 Patten Rd, Lookout Mountain, GA
Directions:
I-24 exits 178 (from the east) or 174 (from the west). Follow the signs for "Lookout Mountain" and "Rock City" and you'll eventually end up on Hwy 17/Tennessee Ave. Stay on Hwy 17 and, once you pass the entrance to The Incline, bear right onto Hwy 58/Ochs Hwy. This takes you up the mountain. At the top, turn left onto Mockingbird Lane/Pattern Rd to Rock City.
Hours:
Daily 8:30 am - 8 pm, closes earlier in the off-season. (Call to verify) Local health policies may affect hours and access.
Phone:
706-820-2531
Admission:
Adults $20.
RA Rates:
The Best