Next Guardian Of The Wonder Tower: It Could Be You 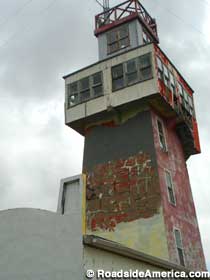 If you’ve ever wanted to hop off the modern-times treadmill and dial back the speed of life, this could be your chance.

You could be the next keeper of the Genoa, Colorado, Wonder Tower.

The Wonder Tower has been a tourist attraction longer than most people on earth have been alive. Charles W. Gregory built the Tower in 1926, claiming that its observation deck was the highest point between New York City and Denver (For those unfamiliar, the Wonder Tower stands in eastern Colorado, which is as flat as western Kansas).

Jerry Chubbuck is the Tower’s current caretaker. He’s packed it with collections of bottles, arrowheads, and mysterious bric-a-brac. But Jerry is well past retirement age, and in 2012 he hoped to find a buyer for the Tower by the end of the summer. When a worthy candidate failed to materialize, Jerry stayed on. 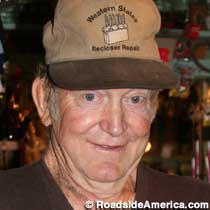 2013 finds him back in his usual spot, regaling visitors with time-worn gags, posing for photos, and assessing every visitor’s potential.

“Most people just want this and that,” Jerry said of the prospective buyers. “Some want the arrowheads. Some want the bottles. Everybody wants the moose in the back.” But Jerry doesn’t want a cherry-picker. He wants to find a person who will continue the dynasty, who will vouchsafe the Wonder Tower like the generations of knights who kept watch over the Holy Grail.

This isn’t a short-term gig. Jerry has been at the Wonder Tower since 1967. 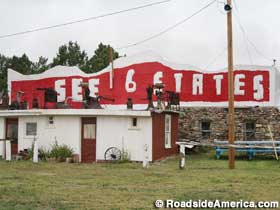 “One family came in,” Jerry said. “A really bad day. Really cold and terrible. And they stayed two hours, at least! And they wanted to come back when it warms up, and take another look, and they were talking like they just wanted to buy the whole place. That would be wonderful.”

Jerry is usually at the Wonder Tower every day from 9 to 5 when the weather is warm, running it as a tourist attraction. If the weather is cold, just give him a call in advance and he might open the Tower. But be warned: Jerry will be studying you, and if he feels that you’re The One, you may be staying longer than you’d anticipated.

One Response to “Next Guardian Of The Wonder Tower: It Could Be You”