« Next Guardian Of The Wonder Tower: It Could Be You | Main | Saloon Cowboy: A 21st Century Muffler Man »

Lanny Dean and His Merry Band of Tornado-Chasers

Lanny Dean had a hoarse throat when we spoke. Maybe from screaming “Agggh! Tornado!!!” He said no, it was just from speaking to so many customers. Tornado season is his busy time. 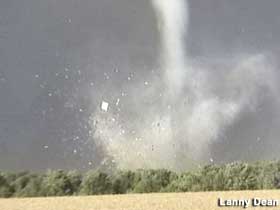 Lanny runs Extreme Chase Tours. He puts people in a minivan, then races them all over the Great Plains — from Texas to the Canadian border — six to fifteen days at a stretch, hunting tornadoes. Lanny has personally seen over 300 twisters, and told us that his tours have a 99 percent success rate.

The tours cost several grand, but you could spend as much on a fancy cruise or a week at Disney World, and never come home with a video of one tornado to show for it.

Tour-goers pay in advance — peak season almost always sells out — and then rendezvous at a motel in Tulsa, Oklahoma, for a meet-and-greet briefing with Lanny’s guides. Warnings are issued to pack lightly, prepare for long hours of sitting, and to mentally ready yourself for rough roads and no bathrooms (sounds like a Team Roadside research trip). The next morning they race off, following mobile radar and their guides’ intuition to wherever twisters are most likely to appear. 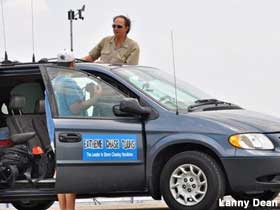 Tour-goers also must sign a liability waver that protects Extreme Chase Tours in case they die. Lanny said that no fatalities have occurred. He personally has had his car flipped by one tornado, and had a tooth knocked out by another, but he knows that it’s bad business to kill your customers (although all deposits are non-refundable).

Thrillseekers and adrenaline junkies usually book with Lanny during his “Mayhem 4” tours in May. We asked Lanny if he’d ever had a problem with customers acting reckless, and he said no. “Once in a while you get someone who’ll say they want to get really close,” he said with a chuckle. “But you get them remotely close, a quarter-mile away, and they’re freakin’ out. There’s no way they’re getting out of the vehicle.” 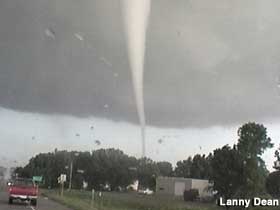 Back in 1991, when Lanny began chasing tornadoes, he was considered crazy. The success of the movie Twister put more people like Lanny on the road, and the recent popularity of reality series such as Storm Chasers have literally created traffic jams of fans around some tornadoes.

Bad weather can strike almost anywhere. What should normal people do if a storm was brewing and they saw an Extreme Chase Tours van on the road?

Sections: Trends Comments Off on Lanny Dean and His Merry Band of Tornado-Chasers