« Lanny Dean and His Merry Band of Tornado-Chasers | Main | The State vs. The Minister’s Tree House: Earthly Codes »

“We sell the same Bud Lite as all 400 other bars in this county,” said Justin Carter, general manager of the Copperhead Road Honkey Tonk Saloon in Colorado Springs, Colorado. “We were looking for something outdoors to set us apart.”

The problem, said Justin, was that Colorado Springs has a very restrictive ordinance on signs. So he built Colorado Redneck Stonehenge, three rusty old cars arranged in a gateway arch at the edge of the parking lot. Justin told the city that it wasn’t a sign; it was art. Colorado Springs replied that it wasn’t a sign and it wasn’t art, either. It was junk, and since the Saloon didn’t have a junkyard permit, it had to be torn down. 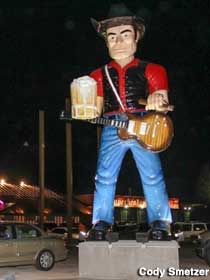 Justin moved to Plan B. Statues, he realized, were recognized as statues by everyone, and didn’t fall under the sign ordinance. And the biggest statue he could imagine was a Muffler Man.

“We’d seen a bunch of them on Roadside America,” he said, particularly one that was customized to hold a cigar and a foamy mug of beer in Sturgis, South Dakota. Justin decided that he wanted one just like that.

Rather than modify an existing Muffler Man, Justin turned to FAST in Sparta, Wisconsin, specialists in giant fiberglass sculptures and one of the few companies capable of creating a Muffler Man from scratch (Its Mold Yard is a priceless resource). He showed FAST a photo of the Sturgis Muffler Man, and in 2012 FAST delivered the Copperhead Road Cowboy to Justin’s saloon.

The Cowboy is accessorized with an electric guitar as well as the mug and stogie. His arms are not as muscular as a classic Muffler Man, his shoulders not as broad. His compact, square head has less pronounced brow ridges, with a more pointed nose, thinner lips, and a wider mouth. His jaw is not as prominent. For better or worse he looks more human than an old-style Muffler Man, but the geneticists at FAST have placed him squarely among the species.

Justin told us that he’s considering making seasonal outfits for the Cowboy, and building a photo-op platform between his legs for shutterbugs. Pushing his luck with the statue gambit, he also put a rearing fiberglass stallion on the roof of the saloon, painted its genitals pink, and lit them with spotlights. The city rolled its eyes, told Justin he could keep the horse, but made him turn off the lights.

3330 N. Academy Blvd, Colorado Springs, CO
Directions:
Outside the Copperhead Road Bar. Northeast side of the city. On the southwest corner of N. Academy Blvd and Rebecca Lane.
Phone:
719-659-9099
Admission:
Free
RA Rates:
Worth a Detour