If you made a list of iconic props from classic 1960s TV sitcoms — the genie bottle from I Dream of Jeannie, the shoe phone from Get Smart — then somewhere on it would be the Jughead-style beanie worn by Goober on The Andy Griffith Show.

Goober Pyle was the cousin of Gomer Pyle and an ace mechanic at Wally’s Filling Station. The character was not book smart, but Goober was shrewd enough to find steady employment into the 1990s, from Andy Griffith to Mayberry R.F.D. to Hee Haw. He was so memorable that he earned a place in the American lexicon as a name for the kind of goober who would walk around wearing a beanie like Goober Pyle. 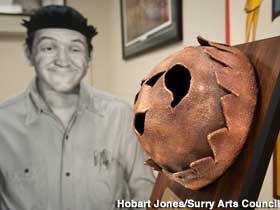 The hat disappeared from public view when actor George Lindsey retired the Goober character almost 20 years ago. But it wasn’t thrown away or stuck in drawer; Lindsey proudly had it bronzed and mounted on a plaque. “I thought the bronzed cap would look good on my wall,” he wrote the Andy Griffith Museum in Mount Airy, North Carolina. “But I was wrong. I think it’ll have a much better home in this museum.” George added with pride that he cut the ragged holes in the top of the hat himself.

Preserved for the ages in metal, Goober’s beanie was officially unveiled in its museum case — next to Goober’s fancy dress shoes and suit — on September 25, 2010. “It’s a great addition, extremely important,” said Jessica Morris, the museum’s director of operations. “It will be one of our most coveted artifacts.”

218 Rockford St., Mount Airy, NC
Directions:
I-77 exit 100 to Hwy 89/Pine St. east into town. At Moody's Funeral Home, turn right at the traffic light onto Graves St. At the top of the hill, turn right onto Rockford St. The museum is part of the Surry Arts Council complex. Look for the brick buildings on the right.
Hours:
M-Sa 9-5, Su 1-5 (Call to verify) Local health policies may affect hours and access.
Phone:
336-786-7998
Admission:
Adults $8.
RA Rates:
Worth a Detour