The Old Homestead was once one of the world’s fanciest brothels, serving the wealthiest men in the gold boom town of Cripple Creek, Colorado.

Now it needs cash, fast, and its traditional revenue model is no longer an option. 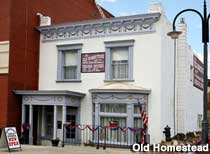 Turned into a museum in 1958, the Old Homestead is Cripple Creek’s last standing cathouse — famous for its ghosts and its “viewing room,” where clients would peek through an indoor window to make their selection of unclothed women.

Charlotte Bumgarner, one of a group of local ladies who runs the museum, said that the Old Homestead has been owned by a half-dozen of different banks and casinos in the past few years. At one point its landlord even shut the museum down. “They were gettin’ ready to take the furniture out of here,” she said. “They even took some of the rooms away and turned them into office space.”

Fortunately, not the viewing room. 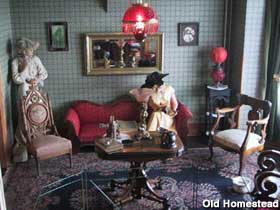 The brothel’s current landlord — another casino — has given the Old Homestead until the end of 2010 to come up with $350,000 so that it can buy itself. “It’s hurry up and frantic time,” Charlotte said. The current owners have been very understanding, she said, “but you never know when that will change. We don’t want to have to worry about who’ll own us next year.”

The Old Homestead is looking into a number of novel funding options, and may brainstorm with the madame of the infamous Mustang Ranch brothel in Nevada. “She’s a delightful woman, a really nice lady,” Charlotte said. “And she loves us.” Regular Joes and Janes can help by “buying” bricks in the historic building for $100. Charlotte said that she’d be happy to make out certificates for something other than “whorehouse” if it would help secure donations.