Christians have been building giant crosses next to highways for some time, from early efforts in Hopwood, Pennsylvania, and Nelsonville, Ohio, to modern stratospheric titans in Groom, Texas, and Effingham, Illinois. 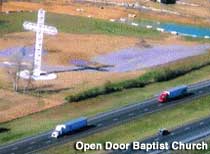 Now a new wrinkle has been added: color. The Open Door Baptist Church of Clear Brook, Virgina, erected a 100-foot-tall, 57,500-pound steel cross just off of Interstate 81 this past June. But 100 feet just doesn’t grab attention like it used to, so the church bought a $15,000 state-of-the-art projection system to beam colored light onto the cross after dark. “It’s a new invention,” said the church’s pastor, Ken Smith. “I was told that it can make 16.1 million different colors. An astronomical figure.” 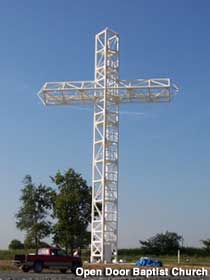 The system was finally installed a couple of weeks ago. Pastor Smith accidentally left the colors sequencing (he had intended to keep it solid red for Christmas). “Everybody began calling!” he said, with the cross now reminding people of the changing colored lights on a giant cross-shaped Christmas tree. “I couldn’t go back and change it with all the people calling.”

Pastor Smith said the cross will continue to cycle through colors every night. He still plans to make it glow solid red for New Year’s Eve, and has penciled in purple for Easter and maybe red, white, and blue for July 4.

817 Hopewell Rd, Clear Brook, VA
Directions:
On the northwest side of I-81 exit 321, along the southbound lanes.
Hours:
Best seen after dark Local health policies may affect hours and access.