• Connecticut’s Garbage Museum (which should not be confused with its Trash Museum) may end up on the scrap heap by next June.

• The man who made the Giant Fist of Joe Louis is dead. “When it was unveiled, many people thought it was too violent an icon.” 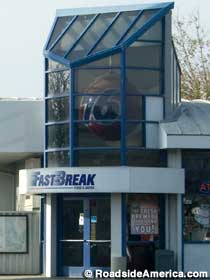 • Another Orange 76 Ball is gone, and people are upset. But the big balls were all supposed to be gone by the end of last year, so maybe it’s a hopeful sign of corporate entropy. Two weeks ago, we spotted a captive 76 ball at one filling station along California’s Hwy 99 — perhaps preserved for some future ball-friendly world.