Lobster Betsey Back on Job

Betsey, who is possibly the world’s largest lobster, has returned to public view in Islamorada, Florida. Most of her, anyway. “Her legs go on tomorrow,” said Betsey’s new owner, “Mangrove Mike” Forster, who is supervising her reassembly. “But the people already coming to see her are just incredible.” 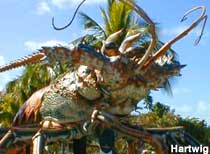 Betsey, an over-sized and adored symbol of Florida Keys wildlife, nearly vanished when her previous owner passed away. Mangrove Mike was quite familiar with the lobster, since she stood across the highway from his Rain Barrel Artist Village, attracting customers to a competing business run by an acquaintance named Tom Vellanti.  “I really loved the guy,” Mike said. “He was like a mentor.”

Tom died, his attraction was sold, and Betsey was hauled to a warehouse and put up for auction on eBay. “I’d been after Betsy for three years,” said Mike, but he felt that her asking price was too high. So he waited. He knew that he had competition — neighboring island Key Largo for one — but he eventually negotiated a ten-year lease for Betsey with Tom’s heirs, which was confirmed only last week.

“I read your blog,” Mike said, referring to RoadsideAmerica’s account of Betsey’s auction back in November. He said that he was tempted to write in to tell readers about Betsey’s new home. But the deal wasn’t yet final, and Mike “didn’t want to jinx it.”

Mike has many plans for Betsey, including a photo-op in which tourists can stick their heads through a board to become underwater lobster-hunters who are unaware that Betsey looms overhead. “I’m real happy to have her,” Mike said. “We’ll be good caretakers of Betsey. She’s not going anywhere.”

86700 Overseas Hwy, Islamorada, FL
Directions:
US-1, milepost 86.7, southbound side, in front of the Rain Barrel Artist Village.
RA Rates:
Worth a Detour

One Response to “Lobster Betsey Back on Job”