Maxie: A Goose Built For A Gander 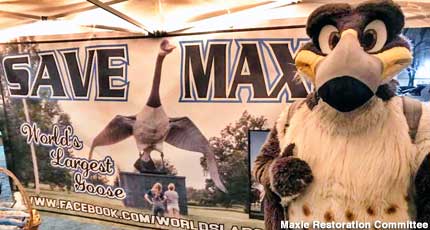 In the summer of 2017 Debbie Jackson and Denise Cummings drove to Sumner, Missouri, to see Maxie, the World’s Largest Goose. The goose had been built in 1974 by their father, David Jackson, and was showing its age. The sisters knew that Maxie needed work — an estimated $50,000 worth — but how could a tiny town and two Kansas City grandmothers raise $50,000 to repair the World’s Largest Goose? 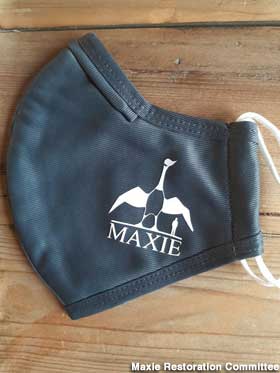 It helped that Sumner was devoted to Maxie and able to pull an impressive share of the fundraising load. A local committee wrote letters soliciting donations from corporate sponsors and auctioned gooseberry pies, some for thousands of dollars apiece. The sisters meanwhile set up a GoFundMe page, learned how to create a 501(c)3 to encourage larger tax-deductible donations, and created a Facebook page to urge visitors to photograph Maxie for themselves (and perhaps donate later). They created a “Save Maxie” booth that they took to nature centers and outdoor events, including the annual Wild Goose Festival in Sumner, for in-person fundraising.

Styling themselves as The Goose Sisters, they made themselves available to the media at every opportunity. They created Maxi-branded face masks and retro-style bumperstickers (which for some reason did not say, “Honk if you love Maxie”) to sell, and an annual “Save Maxie Call-Makers Contest” — hunters’ goose calls — with the proceeds going into the repair fund. 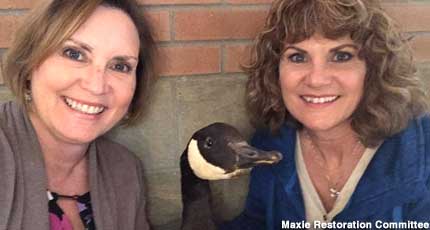 By April 2021 the combined efforts of Sumner and the sisters had raised the $50k, and Maxie’s benefactors were ready to sit down with a contractor.

“It’s been hard to find someone; there aren’t a lot of people willing and qualified to work on a 40-foot-tall goose,” said Debbie. “But now that we have, our goal is to get Maxie cleaned up, straightened out, and get all the restoration work done by the Wild Goose Festival [September 2] this year.”

Sections: Places Comments Off on Maxie: A Goose Built For A Gander

Park Drive, Sumner, MO
Directions:
From US-36 in Laclede, turn south (no stoplight) onto MO-139. Drive 12 miles, following MO-139. When you reach Sumner continue on MO-139 to the west end of town. You'll see Maxie on the right.
RA Rates:
Worth a Detour