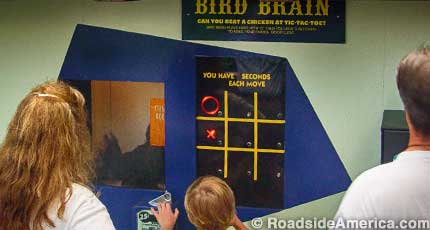 From 1965 to 2005, Reptile Gardens in Rapid City, South Dakota, was a showplace for performing animals. Its “Bewitched Village” was an Old West town full of furred and feathered citizens who acted like the humans they supposedly once were. The show presented behavioral tricks and gimmicks woven into complex tales of animal intrigue, with a goat busting out of jail, dance-hall chickens entertaining at the saloon, and a pig mining for gold.

After the show closed for good, the last vestige of the Reptile Gardens animal acts — pioneered in the 1950s by Arkansas behaviorists Keller and Marian Breland — was “Bird Brain.” This was an intelligent chicken in a screen-fronted box who — motivated by rewards of bird feed — would play electronic tic-tac-toe against you for 25 cents a match (There were actually many chickens, rotated in two-hour shifts.).

A sign advised: “Bird Brain plays first… then you have 9 seconds to make your choice. Good Luck!” We watched as whole families went down in flames, matching wits with the chicken — a fight that we learned by experience was futile.

“Bird Brain” was mass-marketed by the Brelands, and at one time versions of it could be found at roadside attractions across America. It was considered such an icon that a Bird Brain machine, minus the live chicken, was donated to the Smithsonian in 2004.

Reptile Gardens’ Bird Brain continued to humiliate tourists until 2015. Then the machine that housed the chicken broke, and there were no more parts available to repair it. 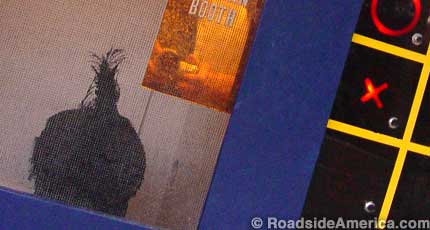