In light of this week’s Supreme Court decision to end handgun restrictions in our nation’s capital, we might all want to schedule a trip to the East Fork Dam south of Lewistown, Montana. That’s where a monument has just been erected to Ed McGivern, who was better at shooting a handgun than anyone, ever. 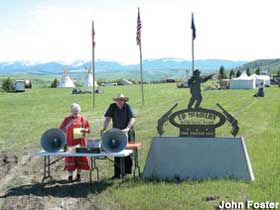 Ed was no Wild West outlaw punk. He set his records when he was pushing retirement age in the early 1930s. He could shoot a dime on the fly or six clay pigeons simultaneously. He preferred standard pistols to automatic weapons because automatic weapons were just too slow.

Ed’s memorial was erected by John Foster, a local historian, and built by folks around Lewistown. Its intent was to remind the citizens of Fergus County of Ed, but he can just as easily inspire us all, now that our ability to pack firepower just got a little bit easier.

Or would you rather be throwing spears?