What moves an ocean liner from point A to point B? It’s not the fuel; it’s the propeller, screwing itself through Neptune’s domain, shoving the boat ahead of it. 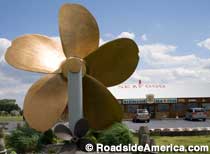 Titanic-sized propellers rarely get appreciated because they’re usually under water. And, also, they’re tremendously large and heavy. They’re the giant buckets of the maritime world. An attraction has really got to want a propeller to haul one away as a photo op. A big one stands outside of a seafood restaurant in Delaware, and now an even bigger one — 34 tons — has gone up at the entrance to the Mariners’ Museum in Newport News, Virginia. Start of a trend?

According to an article in the Hampton Roads Daily Press, the Virginia propeller comes from the SS United States, which is currently rusting at an off-limits pier in Philadelphia. The colossal five-bladed screw is suspended on an original propeller shaft more than 14 feet off of the ground, and hangs over the edge of a manufactured waterfall.

This spot had once been occupied by another big propeller, according to the news story, but this new one is far bigger and “nearly 80 percent heavier than the more conventional four-bladed screw it replaces.” That’s the kind of statistic that floats our boat. The museum should continue to supersize its hardware, and export its castoffs further inland. Eventually, even people in Kansas should be able to enjoy a spectacular screw.

Sections: Attraction News Comments Off on Museum Gives Props To A Big Prop