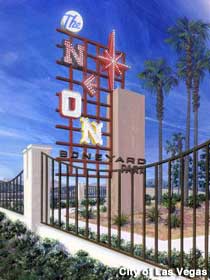 • Boneyard Makeover: For years the Neon Boneyard has been the unofficial, private reliquary for old Las Vegas neon signs. This summer, according to the Las Vegas Sun, it will go public. The Boneyard has now closed so that Neon Boneyard Park can be built — an acre of landscaping, picnic tables, kiosks, and lots of old neon signs, which will replace the old Boneyard and be open to all.

• Epic Eagle: The man responsible for the world’s largest bronze war memorial sculpture in his Veterans Memorial Museum in Branson, Missouri, has his eyes on a bigger prize. According to the Pulaski County Daily, sculptor Fred Hoppe Jr. is building a new National Military Artifacts Museum in Waynesville, Missouri, and in 2011 he will top it with an 11-story-tall, $3.5 million metal eagle, the largest in the world.

• Jet Wreck Bonanza: The president of the sleepy Carolinas Aviation Museum in Charlotte, North Carolina, wants to pep up his attraction — so he’s trying to buy the wreck of Flight 1549, which splash-landed into the Hudson River in 2009. His rationale? The flight was headed for Charlotte when it crashed. He told the Charlotte Business Journal, “For me, this is like a T. Rex skeleton.”

• Rebel Yell or Big Girlyman?: Charleston, South Carolina, is considering proposals for two very different new monuments to stand at its harborside. The first would commemorate the 150th anniversary of South Carolina’s secession from the Union — yet another controversial project from the Sons of Confederate Veterans. The second proposal, eye-opening in its own way, is for a $150 million, life-size replica of the Statue of Liberty — as a man.