Nut Gauntlet Thrown Down In Texas 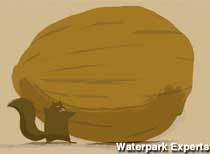 The World’s Largest Pecan is in Brunswick, Missouri. That bothers the people of Seguin, Texas, which for years has had another, older, smaller world’s largest pecan. Their pride in their pecan was such that they never took down the sign proclaiming it to be the world’s largest, although it clearly was not.

In 2007, the big nut was moved to a different spot on Seguin’s courthouse square to make room for a new veterans monument. “When they moved it, the sign broke,” said Sherry Nefford, director of Seguin’s Conventional and Visitors Bureau. The town took this as a wake-up call. “We said, okay, we’ll go ahead and really build the world’s largest pecan.” 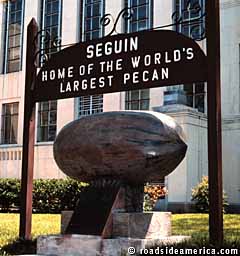 Concept drawings for this new behemoth were unveiled during Seguin’s recent Pecan Fest Heritage Days. Sherry described it as “not a stagnant pecan,” and the drawing indeed shows it being embraced by an overjoyed squirrel, which will be part of the sculpture.

Sherry didn’t want to divulge the pecan’s dimensions — fearful, no doubt, of being bested an opportunistic competitor — but we’ve compared the figures and can say that this new nut will be 44 percent larger than the one in Brunswick.

2 Responses to “Nut Gauntlet Thrown Down In Texas”