« Looking For Screamers On The Jersey Shore | Main | Rt. 66 Bus Arrives To Bewitch The Faithful » 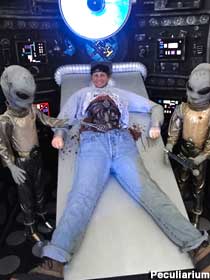 Would you rather eat ice cream that’s been sprinkled with dead bugs, or have a photo of yourself being disemboweled by aliens? At the Peculiarium in Portland, Oregon, you can have both.

The Freakybuttrue Peculiarium and Museum opened in mid-April 2011, offering a range of options previously unavailable at a single attraction. There’s a life-size pose-with-me Bigfoot, a ventriloquist-murdering dummy strapped into an electric chair, a motel room where everything is coated in glow-in-the-dark paint and visitors are encouraged to add phosphorescent graffiti.

“It’s a warehouse of things we like, crazy stuff,” said Mike Wellins, one of the group of local artists that oversees the Peculiarium, which can vaguely be described as a combination fringe art gallery, carnival midway, cafe, and 21st century Cabinet of Curiosities. “We’re fortunate that we live in a city with a huge fan base for stuff that’s not normal.” 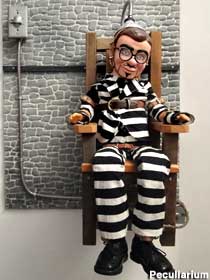 Mike is especially happy that the Peculiarium is real, not a web site masquerading as a museum. “My career has been doing animation and lots of computer stuff, but I also like painting and using a drill gun,” he said. “I think that people want a real place to go to, rather than click to. You can’t eat a bug sundae over the internet.”

The bug sundaes, phosphorescent room, and Interactive Alien Autopsy have proven so popular that they’ll likely stick around, according to Mike. But the Peculiarium was conceived to be flexible, with new exhibits replacing the old. “People have a lot of weird stuff; for a proper gallery it would be too strange,” said Mike, trying to explain the Peculiarium’s admission criteria. “If it’s a landscape that has an aircraft carrier and a unicorn in it, that’s our style.”

Mike is particularly excited about an upcoming exhibit on spontaneous human combustion, and another titled, “Star Wars fan, Star Trek fan fight to the death.”

2234 NW Thurman St., Portland, OR
Directions:
On NW Thurman between NW 23rd and 22nd. Northwest side of the city. I-405 exit 3 toward US Hwy 30 W. Immediately take the Vaughn St. exit, then immediately turn left onto NW 23rd Ave, then take the first left onto NW Thurman St. The Peculiarium will be a half-block on the right (south) side, in the pink building.
Hours:
W-M 11-7 (closed Tu) (Call to verify) Local health policies may affect hours and access.
Phone:
503-227-3164
Admission:
Adults $7 all-day, W $5
RA Rates:
Major Fun