« Bigfoot, Aliens, Bug Food Thrive In The Peculiarium | Main | How We Almost Lost Our Atomic Marbles » 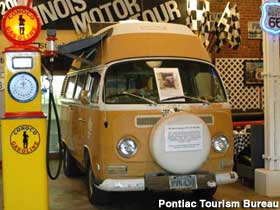 It’s a tricky question, since Bob had two buses. Probably one of them is America’s sweetheart, and both are now on display at the Route 66 Hall of Fame and Museum in Pontiac, Illinois.

Bob was Route 66’s roving ambassador and resident hippie. He was never far from it: his family runs the Cozy Dog Drive In (birthplace of the Hot Dog On A Stick) and for years he owned the Hackberry General Store, both iconic Route 66 attractions. For over three decades he wandered the highway in his 1972 VW Hippie Bus, creating busy-bee Robert Crumb-esque pen-and-ink drawings of his travels, delighting his admirers when he would just show up somewhere along The Mother Road.

Bob’s Hippie Bus was the inspiration for “Fillmore” in the movie Cars. The character was originally named “Waldmire,” but Bob asked that it be changed when he learned that toy versions of the bus would be sold at McDonald’s.

Bob died in 2009 of cancer. He theorized that his disease was caused by his life-long love of processed snack foods (a common weakness of carb-fueled road-trippers). 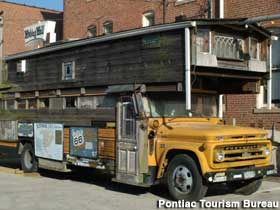 Bob’s other vehicle — the one in which he spent his last days — was an old school bus fitted with a hand-built wooden camper top. It resembles a ramshackle houseboat on wheels, and probably struck terror in approaching vehicles on the narrower parts of Route 66.

There was some confusion after Bob’s death as to which of Route 66’s many Route 66 Museums would get his buses — the equivalent of a normal museum getting a Space Shuttle. The Hippie Bus went to the Route 66 Hall of Fame and Museum — and now the Camper Bus is there as well. It was Bob’s home as well as his vehicle, and its Bob-centric interior has been preserved pretty much as he left it. Tours are given when someone in the museum is free with the key, and museum reportedly has had difficulty getting awed Route 66 tour-goers to leave the bus after they enter it.

“Bob lived his life the way he wanted to,” said Marty Blitstein, museum treasurer and sometime tour guide. “Whenever I’m in there, I know he’s in that bus.

Route 66 Association of Illinois Hall of Fame and Museum

More on Illinois Route 66 Hall of Fame and Museum

One Response to “Rt. 66 Bus Arrives To Bewitch The Faithful”