Quan Am Smiles Upon Tulsa

After years of delay, Tulsa, Oklahoma, is now the unlikely home of America’s tallest Buddhist deity. 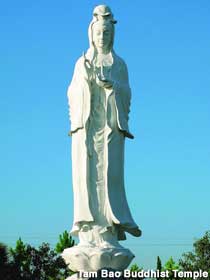 Quan Am Bodhisattva, embodiment of compassion and kindness, could easily peer into the window of a fifth-floor building if there were any nearby, which there aren’t, and if the deity indulged in such nonsense, which she doesn’t. Tulsa’s Tam Bao Buddhist Temple built the statue, and now wants to illuminate Quan Am and bond her cracks. That isn’t metaphysical Buddhist language; the Temple needs $100k for lighting and sealant to finish the job.

Quan Am stands two feet taller than the Jolly Green Giant (patron saint of frozen vegetables) and eight feet taller than Mother Mago, an American-based deity whose statue suffered an unhappy fate. Although technically within city limits, Quan Am is at the far eastern edge of Tulsa, on flat, rural land, visible for miles.

Quan Am is built of 200 tons of granite, as solid as the Path of Moderation, and designed to smile placidly in the face of karmic dissonance such as Oklahoma twisters.

Tulsa city councilor Dennis Troyer tried to block the erection of Quan Am, saying the statue was too tall. When it was pointed out that downtown Tulsa has a pair of Giant Praying Hands that are three feet taller, Troyer argued that hands are just hands; Quan Am is a non-Christian god. The zoning board, finding no code that prohibited idolatry, approved the statue by a vote of 4 to 1.

Sections: Statues, Tourism News Comments Off on Quan Am Smiles Upon Tulsa