• Smiley Stay of Execution: The power of one vote is awesome — if that vote is part of a tiny group.  That’s the lesson to be learned in Grand Forks, North Dakota, whose city council just voted 4-3 not to tear down, at least for the moment, “Smiley,” the city’s beloved rusty winking water tower.  Councilman Art Bakken, in the minority, was not gracious in defeat.  “We’re going to save a piece of junk.  That’s just stupid.” 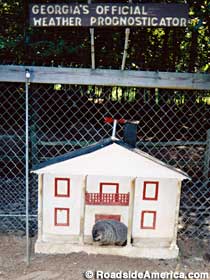 • Dueling Weather Groundhogs: Phil the groundhog in Punxsutawney, Pennsylvania, is the only one-day weather forecaster to support a year-round tourist industry. Will his February 2 rivals ever become that famous?  We can think of several that would be fun to visit in July — if there was something to see — including L’il Bit, the porcine “groundhawg” in Lexington, North Carolina; Calamity J. Marmot, who is actually a stuffed albino porcupine carried around a white plastic trash bag in Livingston, Montana; and Lander Lil, a groundhog who “died years ago” and now exists only as a one-day weather forecasting bronze statue in Lander, Wyoming.

• Proof is in the Runestones: Anyone near Battle Lake, Minnesota, will want to stop by the Vining Community Center this Sunday and meet Ralph Mayer, who will discuss his new book “The Runestone, Them Boys was Here Alright.” It’s based on his research into the Kensington Runestone, whose existence proves that Vikings were in Minnesota centuries before Columbus was even born.  The Fergus Falls Journal calls the Runestone “famous and formerly controversial,” and adds that it “was recently authenticated by Swedish academia.”

• Moving Minnie Pearl: A man in Centerville, Tennessee, is threatening to take away a statue of the late Hee Haw star Minnie Pearl, which he paid for, if it’s moved even “an inch” by the town.  Centerville claims that people are standing in the street to take pictures of Minnie, and that it only wants to move the statue fifty feet, and that it promises to light it at night.  But the man wants to keep it right where it is, where the sun can hit Minnie in the face.  “It’s very important, and I’ll stand my ground as long as I live.”