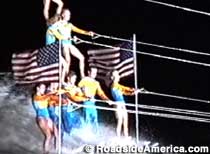 • Disappearing Waterski Lake Refills: The governor of Wisconsin has announced that the state’s Lake Delton will be a  lake again by Memorial Day. The lake, which provided the natural stage for Tommy Bartlett’s iconic Water Thrill Show in the Wisconsin Dells, disappeared last June when a dam burst and it drained away.

• End of Trail Closes: The End of the Trail Interpretive Center in Oregon City, Oregon, will close its doors on March 9, according to The Oregonian. It was built in 1995 to resemble several giant covered wagons, but windstorms ripped the fabric off and left only sad-looking rusted hoops. City manager Larry Patterson told The Oregonian, in a nicely-mixed metaphor, “We’re not going to throw money at something that’s a dead-end street.”

• Garbage Museum is Tax-Exempt: The Garbage Museum in Stratford, Connecticut, has been granted tax-exempt status from the Internal Revenue Service. The Connecticut Post reports that this may bring in enough new donations that the museum won’t have to close in June, as had been feared last December. Connecticut’s Trash Museum was also made tax-exempt, in yet another example of sweeping federal change.

• Abduction of Minnie Pearl: Rod Harris has made good on a threat that he made only last month and has kidnapped the statue of Minnie Pearl that stood in Centerville, Tennessee. “I had an agreement that was ignored,” Harris told The Tennessean. “Government doesn’t have a right to make an agreement with a person and turn around and break that agreement.” Centerville planned to move the statue a few feet to make road for road construction, so Harris has moved it into the lobby of a hotel in a neighboring small town, Linden.