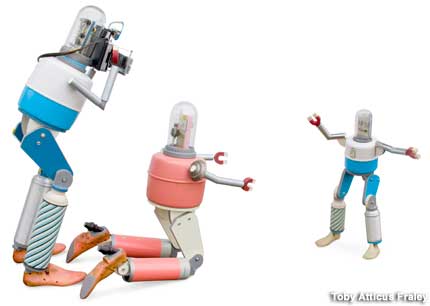 If the word “robots” calls to mind a clanking metal horde bent on enslaving the human race, then Toby Fraley’s “The Secret Life of Robots” may cool your paranoia. Toby, whose art first came to our attention in 2011 with his storefront “Robot Repair Shop” in downtown Pittsburgh, Pennsylvania, now presents “Secret Life” at Pittsburgh’s Space gallery (812 Liberty Ave.) through at least April 2014.

Toby’s 13 vignettes show robots as average, everyday Joes and Janes — who look a lot like staged advertising photos from the American 1950s (Toby spent 18 months getting the settings just right). Happy mom and dad robots celebrate their toddler’s first clanking steps; a nosy parent eavesdrops on a teen robot’s telephone call; a tiny elderly lady robot hooks a can of cat food with her umbrella. Toby only diverges from the mid-century Shangri-La in his final scene, where a dead robot’s ghost can be seen floating up and out of its bed. 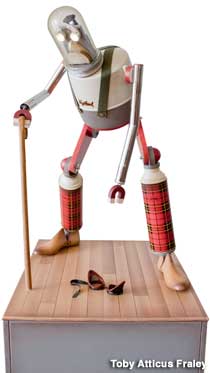 “I tried to humanize them, to tug at some heartstrings,” Toby told us, although he conceded that the death scene probably won’t prompt any calls from private collectors. “No one wants a dying robot in their home.”

The robots’ 1950s world comes partly from Tony’s artistic preference, and partly from the materials used to build the robots, mostly vintage thermoses, picnic coolers, and vacuum cleaners. Stamped steel and cast aluminum naturally lend themselves to robots. “You couldn’t build robots out of today’s products,” said Toby. “Everything today is plastic; UV light is going to destroy it. A robot needs to last a long time.”

Toby makes robots on commission as well as for public display (You can hire him to create one through his web site). This means that Toby always has a supply of robot parts on hand. “Ten years ago I never thought I’d own over 20 vintage vacuum cleaners. That sounds like something an insane person would do,” he said. “But you don’t know when you’ll see another, and I feel I have to stock up.

“If I don’t end up making robots the rest of my life,” he said, “I’ll have the most amazing yard sale ever.”