There’s been some buzz recently about the Historical Center in Columbus, Ohio, which has opened a temporary exhibit titled “Controversy: Pieces You Don’t Normally See.” Among the items on exhibit are Ohio‘s electric chair and a Ku Klux Klan outfit. The items are considered so traumatizing that they’ll only be displayed for a few months. They’re in a tiny, separate room, and no one under age 18 is allowed to see them unless accompanied by an adult. 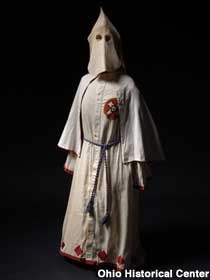 Is this a museum exhibit, or an “adult entertainment” section in a DVD store?

Naturally, we applaud any public exposure for a state’s attic of historical oddities (Ohio’s last great oddball exhibit was 2004’s “Beyond Bizarre,” by museum studies Wright University students).  The problem with “Pieces You Don’t Normally See” isn’t the pieces themselves — it’s that you don’t normally see them. Faint-hearted big city curators have decided that some of the stuff that they see every day is stuff that we can’t.

There are, however, places where you can see an electric chair, or a Ku Klux Klan outfit, and other amazing items as well, and you don’t have to straight-jacket yourself into a narrow time window or age requirement. In fact, lost in the noise about the Ohio Historical Center was a story about the Prairie Museum in Sheldon, Iowa, which has exhibited a Ku Klux Klan outfit for the past year-and-a-half with no reported ill effects to its visitors or the youth of Iowa.

The Sheldon Prairie Museum didn’t need to display the outfit to drum up attention. It’s already notable for exhibiting the bones of an elephant that died in town.