It may not signify a cosmic shift in thinking, but it’s nice to see that the organization Americans for the Arts has chosen a flying saucer as one of the top 40 “best public art works in the United States and Canada” for 2010. 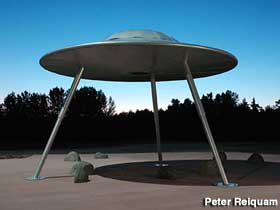 The saucer is the star of a park plaza near Everett, Washington. Titled “Landing Zone,” it’s the work of artist Peter Reiquam, who created not only the saucer — which is 16 feet wide and 14 feet high — but also alien boulders and a big “X-marks-the-spot” X for seats. The saucer, on legs nine feet high, can be a shelter in rain or shade in sun.

“The only thing we changed,” said Wendy Becker, the county’s Economic and Cultural Development officer, “was that we asked Peter to put some plexiglass right in the center. You know, like when you put a skylight in your bathroom?” According to Wendy, when someone stands directly beneath the saucer now, “it’s like you’re in a little cylinder of light; like you’re going through a laser beam.”

Although Snohomish County is “pretty middle of the road,” with no wild UFO history according to Wendy, its arts commission instantly recognized Landing Zone as public art with pizzazz (It beat out 28 competitors for the plaza). “They knew it could be a community landmark,” Wendy said. “They knew it would be a place where you could say, ‘Meet me at the spaceship,’ and people would know what you were talking about.”

(Everett already has another landmark that could serve that purpose, but it’s in town, not out in the county.)

So a saucer rim dip to the people of Snohomish County, and a transfixing beam of gratitude to Americans for the Arts, which also chose the Dallas, Texas, giant robot Gumby as another of its top 40.

11928 Beverly Park Rd, Everett, WA
Directions:
I-5 exits 182 (northbound) or 183 (southbound) onto Hwy 525. Drive north for about three miles. Turn right onto Beverly Park Rd. Drive a half-mile, then turn left into Paine Field Community Park. The flying saucer is at the far end of the parking lot, on the right.
RA Rates:
Worth a Detour