My, how attitudes have changed in Hatch, New Mexico.

It was only six months ago that Teako Nunn, owner of Sparky’s BBQ, had to fight the town to erect a giant pig out by the highway. 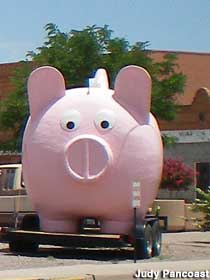 Now the Alamogordo News reports that the town of Hatch has accepted delivery of a 65-foot-tall nuclear missile, which it plans to erect out by the highway to attract visitors to the town. It’s part of Hatch’s town slogan, “The New Gateway to Space,” which has been added to its old slogan, “Chili Capital of the World.”

We asked Teako if he thought that the press generated by his successful pig fight had some bearing on Hatch’s sudden change of heart. “Oh, absolutely,” he said. “The missile’s here because they got the idea from the pig and from the Uncle Sam and the Muffler Man” (two of Teako’s other giant statues in town). “But I don’t care. I don’t want credit; I just want to have fun!” 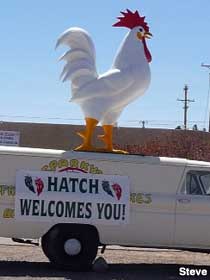 To that end, Teako sees the missile — currently being restored in the town’s maintenance yard — as a green light to acquire even more large eye-catchers for Sparky’s. “The town has no idea what I’m up to,” he said with a laugh. “If you hear of a rocket for sale, just let me know.”

And Teako added that while the pig has received the town’s blessing, it still has to win approval from the state. “They came down from Santa Fe and told me, ‘We’re worried that the pig is mobile,'” Teako said. “It weighs two tons. It’s inside a fence. There’s no way it’s gonna move.” So Teako has symbolically secured the pig to Hatch by looping a golden lasso around one of its ears, and staking it to the ground.

More on Teako's Giants of Hatch

One Response to “Space Race – No Squirming Hatch Blowers in NM”