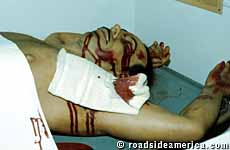 A fascinating “Crime and Punishment” tourist attraction has returned to public view. We first visited this shrine to former Public Enemy No 1 in the 1980s, when it was owned by Dillinger fanatic Joe Pinkston in Nashville, Indiana, and visited again in the ’90s. Joe died in 1996, and the collection (including John Dillinger’s death pants) was bought by the Lake County Convention and Visitors Bureau, which moved it to the Indiana Welcome Center in Hammond in 1999.

In 2001 Dillinger’s great-nephew, Jeffery Scalf, filed a lawsuit against the museum. He claimed, according to an article in the Gary Post-Tribune, “that state law gives relatives the rights to control a personality’s name and image for 100 years after their death” (Jeffery evidently did not have the same problem when Pinkston ran the Museum, as both Jeffery and Joe were Dillinger sympathizers.). After years of battling, the museum was forced to close in 2006, although its exhibits remained in place behind locked doors.
The case was expected to go to trial this June — but both parties reached a surprise agreement on Thursday, March 27, and the Dillinger Museum was open for business bright and early Friday morning.

The abrupt turn-around, according to a story in the Munster (Indiana) Times, “comes just in time to capitalize on a resurgence of interest in the bank robber in the region. Director Michael Mann and movie star Johnny Depp were in Crown Point filming scenes for the new ‘Public Enemies’ movie this week.” According to Jeffery, “I was eager to move ahead in the operation of my business … that has numerous licensing agreements, including the Franklin Mint.”

It isn’t the end of the acrimony, however. One of the exhibits in the Museum is a replica of a pistol that Dillinger reportedly carved out of wood, which he then used to break out of jail. According to another story in the Munster Times, the Museum claims to have the original as well, which was owned by Joe Pinkston. But that claim is refuted by the American Police Museum in Chicago (currently closed), which says that IT has the original. Others insist that the gun was lost in fire in 1940, or that it was actually carved out of soap.