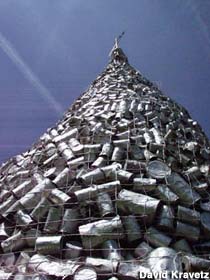 One of the tallest things in North Dakota, the World’s Largest Pile of Oil Cans, has been given a May 29 eviction date by its current owners. The 45-ft. tall pile was built in Casselton the 1930s next to a gas station, and quickly became a popular attraction. Its stewardship was assumed in 1973 by the property’s new owners, a locally-owned manufacturing company, which moved the tower 300 feet but otherwise respected its lofty position in North Dakota’s travel destination hierarchy.

According to the Grand Forks Herald, however, the company has been sold twice in the past four years. The current president of the plant, which manufacturers treads for bulldozers, says of the Pile, “Aesthetically, it’s not something we want around.”

The Cass County Historical Society is feverishly trying to figure out a way to keep the Pile in Casselton. Should that effort fail, the Pile might be moved 15 miles west to “Bonanzaville,” a vast, Harold Warp-ish aggregation of North Dakota treasures in West Fargo.