Gods are notoriously fickle, but so are their human constituencies. 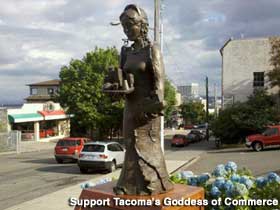 Tacoma, Washington, for example, once had a “Goddess of Commerce” statue. She held a globe in one hand, an oar in the other. She supposedly resembled the wife of the architect who designed the building on which she stood.

In 1950 the building was torn down and the Goddess was melted, reportedly for a bottle of whiskey.

In 2008, Tacoma booster Griselda “Babe” Lehrer decided that the city needed a new, updated Goddess of Commerce. She quickly raised money, partnered with the Tacoma Historical Society, and hired a local sculptor. She confidently predicted that the statue would be standing by the end of the year.

It wasn’t. A lot of people didn’t like the new Goddess, or that Babe and the sculptor, Marilyn Mahoney, had just gone ahead and built it and now expected the city to take it. The Goddess was rejected by the Tacoma City Council in 2008 — which then erected another statue on the same spot — by the Tacoma Arts Commission in 2009, and by the Tacoma Landmarks Preservation Commission in 2010.

Everyone had an opinion about the Goddess. Much of it was unflattering. The Arts Commission wrote that the statue lacked artistic or aesthetic merit, and judged that it was worth $20,000 less than it cost to make. The Goddess’s head — no longer an architect’s wife — was seen by some as Native American and potentially offensive to the local Puyallup tribe. The miniature Tacoma that she held in her hand was compared to a TV dinner tray. Her dress was described as the kind worn by polygamist cult wives. People made fun of her ship-loading-crane earrings, or were creeped out by the tiny salmon streaming down her back.

But the Goddess also had fans, and Babe Lehrer fought on. Finally, another local booster, Seong Shin, came forward and offered the Goddess a landing spot. She was unveiled on August 31, 2011, on a privately-owned, formerly ragged corner lot leading into Tacoma’s theater district. The street corner now looks much nicer, even for those who may not love the seven-foot-tall bronze Goddess standing atop a four-foot concrete base.

In the end, the base was the Goddess-backers’ only artistic compromise. She was originally supposed to stand atop a miniature Mt. Rainier.