« Stonehenge II On The Move | Main | Roy Rogers: Happy Sales to You »

Neither side is conceding the Evolution vs. Creation debate, but perhaps its tipping point came on Memorial Day weekend, 2010. That’s when Tree to Tree Aerial Adventure Course opened in woody Gaston, Oregon, and proved that people really will act like monkeys if given the chance. 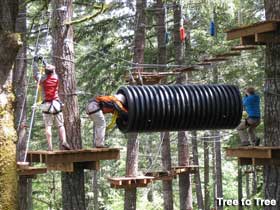 In spite of the Pacific Northwest’s nature surplus, it took a family of immigrants — Julie Beres and her kids from New Jersey — to bring something like Tree to Tree to the West Coast. “We asked ourselves, ‘Why not Oregon? Those people love the outdoors,'” said Julie, recalling the family meeting that sparked the idea. Julie’s kids happen to be engineers, architects, and IT professionals, so the project was less daunting than for the average family. “And the trees out here are huge,” said Julie. That sealed the deal.

Couch potatoes wooed by Ninja Warrior and Avatar are naturals for the new park, as is anyone who doesn’t just want to hug trees, but catapult through them.

Julie described the park in various ways: a hike at the top of the woods, an obstacle course in the trees, and our favorite, “a return to nature on steroids.” Wobbly bridges, culverts, ropes, climbing walls, and zip lines hang in the air, leading from trunk to trunk between massive Douglas Firs. Five different courses are ranked according to difficulty. Julie said that her kids employed her as a test victim when setting up the courses in the park. “If Mom can do it, anybody can do it.” 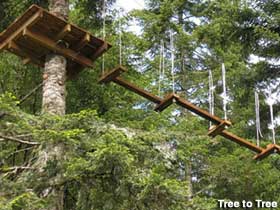 (People who just want to walk through the trees can do that, too, watching the antics above.)

Everyone is issued a helmet and harness and receives lots of training before they’re set free into the park, and Julie said that the courses would remain open rain or shine. “Some people like it better when it rains; it feels like a rain forest here.”

“We had a 79-year-old guy yesterday doing the second and third course,” Julie said. “The people in Oregon are tough, man. They can deal with it.”