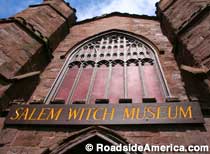 Downtown Salem, Massachusetts, is popular with tourists on foot, who often follow the town’s “Heritage Trail” marked by a red line painted on the pavement. Attractions along the red line can count on steady customers.

The red line doesn’t stop at the Salem Witch Museum. Its owner, in fact, has accused the mayor of Salem of deliberately routing the red line away. So the owner paints his own red line every year, indistinguishable from the official red line, leading from it to the front door of his museum.

But in this case, we shout “Huzzah Witch Museum!” Then our heads spin thrice so we can also croak “Get thee behind me, Satan!” A little ad hoc misdirection for witch-seeking outsiders tolls the right bell for us, especially if it helps frizzle the chamber of commerce’s tidy notion of a “Heritage Trail.” We hope those red lines loop the Bewitched statue, stretch a long, scabrous tail out to the Witch Dungeon, and then end in a strange wood where Blair witches dine…..