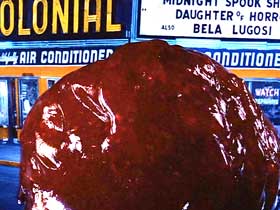 It arrived in a meteorite that fell to Earth near Phoenixville/Downingtown, Pennsylvania. Small at first, this jelly-like monster quickly absorbed and ingested every living thing that crossed its path, enabling it to grow to giant size in only one warm summer evening.

Fortunately for humankind, the misunderstood teenagers of Pennsylvania were hip to The Blob (even if the adults weren't). The kids figured out that this immense creature could be frozen solid with a few CO2 fire extinguishers, and Earth was saved.

Earth would have been saved anyway when pre-Global Warming winter came, or when the adults finally learned to stay out of The Blob's way, but, still, the punk teens saved it a lot quicker.

Prime location(s):
Southeastern Pennsylvania, and it attacked a small town in Colorado 30 years later. It could have rampaged anywhere in America.

Special Powers:
An insatiable appetite, aided by an ability to eat and dissolve every Earth creature. Also an uncanny sense of knowing where to go next when everyone runs away.