« Castle Blood: Where Every Day Is Halloween | Main | Get Your New Kicks On Route 66 » 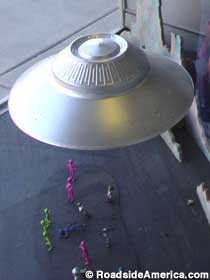 When the FBI recently opened an online “vault” for its declassified documents, it spun Roswell into the news cycle like the hypersonic rim of an alien space saucer.

Among the heavily censored reports and teletypes was one marked “urgent” about the Roswell UFO crash of 1947. The memo describes a phone call from the headquarters of the Eighth Air Force (in Texas), reporting that a hexagonal “flying disc” had been recovered near Roswell. It continues, “(censored) advised that the object found resembles a high altitude weather balloon with a radar reflector” — a theory advanced by debunkers ever since — but then the memo immediately dismisses it with, “telephonic conversation between their office and Wright Field [center of Air Force R&D] had not borne out this belief.”

It’s satisfying to read official sort-of-corroboration of what folks in Roswell have said all along. But a lack of government approval has never stopped a museum from displaying a mummified alien baby if it wanted to; in fact, the fringe nature of UFO reports probably made it possible. We hope that the new FBI revelations won’t make exploitation of crashed flying saucers a breach of National Security, or the whole UFO thing too mainstream for DIY fans of outer space visitors.

And it turns out that Roswell wasn’t the only place in New Mexico to host a spaceship calamity. The FBI vault also contains the “Hottel Memo,” which describes a crash on the other side of New Mexico, and includes descriptions of three-foot-tall alien corpses. Critics have dismissed it as hogwash invented to sell bogus prospecting tools based on supposedly salvaged “alien technology” — but the naysayers are probably just jealous that they didn’t get to play with the gadgets or see the bodies.

US Hwy 70, Roswell, NM
Directions:
From the downtown intersection of US-380 and 285, it's a quick drive to most of the alien-and-saucer spots of this UFO-happy town.
RA Rates:
The Best