Pancho Villa Is Gone, His Finger Lives On

Pancho Villa, notorious Mexican bandit and revolutionary, died in a hail of gunfire in 1923. According to legend, his corpse was later dug up and dismembered, with his body parts going to relic collectors in the U.S. and Pancho Villa fans in Mexico. 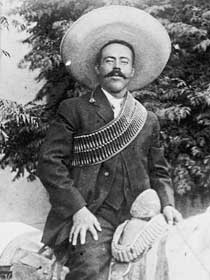 One of the best pieces, his trigger finger, is now in the window of a pawn shop in El Paso, Texas. And it’s for sale.

“We’ve had it maybe five years, I don’t remember,” said Larry Brown, the owner of Dave’s Pawn Shop. “A guy came in off the street and sold it to us.” The finger, black and crooked as if still pulling a trigger, is cushioned in a little cotton-filled box. You can own it for $9,500.

Pancho’s finger is only one of many marvels available for purchase at Dave’s. Also in the window is a baby vampire heart impaled with a silver cross ($7,500). Inside, displayed among the usual pawned jewelry and old musical instruments, are several shriveled  monsters (including two Mermen and a Chupacabra), Nazi and voodoo regalia, human bones (and a mummy), and various animal body parts. Dave’s also had a human shrunken head, but it was reportedly purchased by a member of ZZ Top. 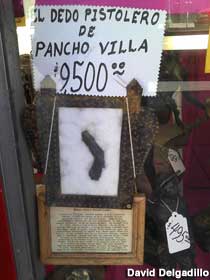 “Most of our clients are from Mexico, and they bring us things,” said Larry, noting that his shop is only a few blocks from the border, and that people in the region know of his fondness for oddities. “We have a reputation,” he said. “And there’s nowhere else to unload some of these things.”

Store manager David Delgadillo didn’t believe that the finger was in any immediate risk of being sold, although he felt that $9,500 was “a good price” for such a priceless relic. We asked him what oddities from Dave’s had sold recently. “Two-headed rooster, two-headed rat, two-headed duck,” he said, ticking off a list in his head. “We sold a raccoon with two heads; it was nice! Probably we sold it for $400, I think.”

Sections: Places, Roadside News Comments Off on Pancho Villa Is Gone, His Finger Lives On