« Vacation of a Lifetime | Main | Sun Setting on Foamhenge » 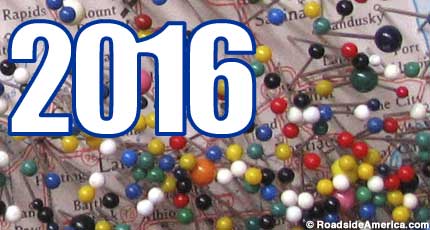 2015 was a year that pundits proclaimed was a downer, but in the Roadside universe it rolled along with few potholes or washouts. The Space Shuttle Independence in Texas — a full-size, walk-thru Shuttle on a 747 — was pushed back from 2015 to 2016, but that wasn’t a shock; space projects haven’t met deadlines since the 1960s. And did anyone really expect the RoboCop statue to be unveiled in Detroit, as has been promised every year since 2011? We didn’t; it wasn’t. Maybe RoboCop will surprise us in 2016.

There were a few high profile train wrecks (creating and/or running an attraction isn’t easy). Far more frequent were the success stories of 2015, including the reopening of favorites such as America’s Largest Pyramid and the Dillinger Museum. The ancient Mitchell Corn Palace was given a complete makeover, and the results actually looked pretty good.

Foamhenge, whose future was in doubt as 2015 began, not only survived but enters 2016 with the unexpected blessings of its hometown. Its creator, Mark Cline, told us that he’s also been given the go-ahead to reopen his Dinosaur Kingdom attraction, and to create a new attraction for the building that formerly housed the Natural Bridge Wax Museum, which was recklessly shuttered by the previous town administration.

The most talked-about over-the-top attraction for 2016 is the full-size Noah’s Ark being built in Kentucky by the Creation Museum people. Other anticipated openings include those of the National Videogame Museum in Texas, the Museum of Neon Art in California, and the Burger Beast Museum in Florida. Rumors suggest that Las Vegas will unveil a huge Black Light Slide in 2016, and that a town in Minnesota will erect a big metal Godzilla. If that sounds improbable, remember that in 2015 a town in Oklahoma erected two giant Transformers.

Presidents and their landmarks will be big news in 2016 (they’ve always been big with us), and America’s oldest presidential museum — for Rutherford B. Hayes — will celebrate its 100th birthday. Ronald Reagan’s will turn 25. It will be 75 years since the blasting and hammering stopped on the giant President heads at Mount Rushmore (work continues, slowly, on their neighbor Chief Crazy Horse). 2016 will also feature the 250th birthday of Uncle Sam, or at least the real guy who supposedly inspired the caricature creation.

The fate of several controversial monuments in New Orleans (such as this one) will be decided in 2016, as will that of the Orange Dinosaur of Massachusetts, although people seem far more inclined to save the dinosaur. The Scary Lucy statue will supposedly be replaced by a boring, normal Lucy in 2016, a plan that we hope its hometown will realize is a big mistake. 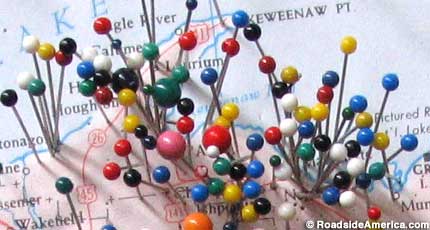 Also on track for 2016 is the opening of the new Spam Museum, and the expansion of the National Museum of the U.S. Air Force with even more rockets, planes, and bombs. Outdoor Los Angeles will welcome the return of its Tail o’ the Pup diner and Rocky and Bullwinkle statue. And everyone will celebrate the completed restoration of Roadside titans Big Ole and Tex Randall.

It’s a lot to track, but we’re happy to do it. What don’t we know about 2016? Plenty. There will be surprises — and as soon as we find out about them, we’ll point you in the right direction.

Sections: Coming Soon, Trends Comments Off on Sweet 16: Looks Like a Beauty