Vacation of a Lifetime 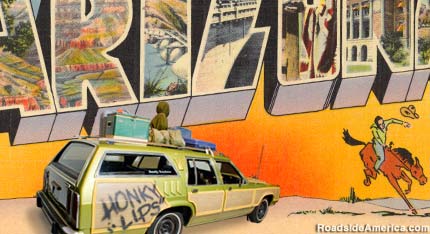 For a generation of roadside fans, the movie National Lampoon’s Vacation (1983) defined the horror and wonder of the American road trip. Despite the film’s premise, its filmmakers didn’t actually travel to too many places (National Lampoon was notoriously cheap). But the film did provide a roadside snapshot of sorts during its opening credits, when its peppy theme song played over a montage of 50 “vintage” postcards (some were faked).

Many people view those images with a pang of nostalgia, sad that they’ll never be able to see those attractions of yore. Those people are mistaken! Most of the classic attractions seen on the postcards in National Lampoon’s Vacation are still standing, and can be visited today, even though the film is itself now old enough to be vintage.

Many of the postcards were of generic scenes (“Shady Country Lane”), or buttocks/outhouse gags (“Having No End of Fun”), or fantasy photos of giant vegetables on railroad cars. Several were of places so famous that they probably won’t disappear in our lifetimes (Statue of Liberty, Golden Gate Bridge), or of neon motels that were already gone when the film opened in 1983. 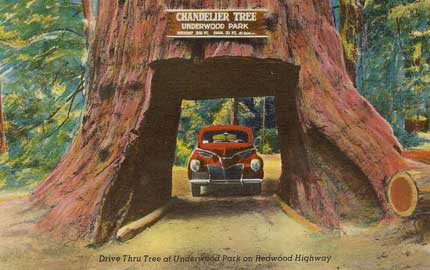 But among the postcards were those for a number of classic roadside attractions, most of them still delivering wonder to travelers. Here are the attractions in the order in which they appear:

Sections: Rants, Road Trips Comments Off on Vacation of a Lifetime