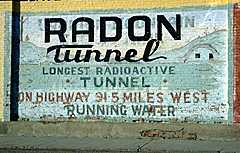 Today's Sights: Miner's Hat Realty | Last Stoplight Resting Place | Chapel of the Dove | The Big Stack | Our Lady of the Rockies | Berkeley Pit | Radon Health Mines | Frontier Town We've got a lot to see today, so before sunup we're heading east on I-90. Billboards hit us at the Washington/Idaho border: "Leaving Apple Maggot Quarantine Area," and "Celebrate Idaho With Us."

Next, "Willkommen zu Kellogg," and Kellogg, ID's Bavarian-themed Area. Bavarian concrete highway dividers and painted Teutonic trim abound, but it lacks the critical mass to pull off the illusion. More cogent to Kellogg's heritage are Miner's Hat Realty, a building shaped like a big miner's hard hat, complete with giant carbide lamp, and the Sunshine Mine Disaster Memorial, commemorating the 91 people who perished during a 1972 mine fire. A statue of a miner holding high a rock drill guards dozens of impromptu headstones.

At the nearby Sunshine Mining Company headquarters, the happy, unburnt-up Sunshine Miner Family, a statue done by the same artist, visually changes the subject. 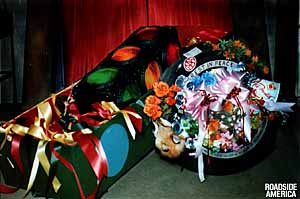 Wallace, ID used to be famous as the home of the Only Stoplight on I-90, until uncaring road builders finished the overpass around town, and finished the town's claim to fame. But the town was not so easily dissuaded. They had a grand funeral for the stoplight, putting it in a coffin, and had a horse-drawn hearse carry it as a bagpipe band played. Now, a sign at the old site gives directions to the Wallace Mining Museum, where the light can still be seen, resting in its coffin.

Idaho quickly becomes Montana, and the well-advertised World Famous 10,000 Silver $ Bar looms (at I-90, mile marker 16). We wish we could, but we cannot recommend a stop. 25,074 silver dollars do adorn this bar, embedded into the counter, and on all the walls as well. But really that's it. Run in, if you must, take a short peek, then head to the front and "Montana's Largest Gift Shop" for souvenirs.

Chapel of the Dove

We are behind schedule, so the "Xenon Codex" is cranked up, and before long we screech into Missoula. McC., a high school friend of Doug's, meets us at the local KFC, and tries to offer us a personal four hour tour of the fascinating historic architecture of the downtown area. We ask him instead for the one place he'd take a friend who only had fifteen minutes to live, and suddenly we're off and running into the basement of the Wilma Theater for a gander at the Chapel Of The Dove. For fifteen years, owners Ed (human) and Koro (pigeon) have curated this shrine to all the entertainment greats that have visited Missoula. The chapel itself has 105 seats, and weddings are regularly performed for couples who don't mind life-sized posters of Humphrey Bogart and Clark Gable behind the altar.

The Big Stack can be seen miles before you arrive in Anaconda. At 585 feet tall, it was once the country's tallest smokestack - the Washington Monument could fit inside it - and it used to benevolently belch lead and arsenic over residents. In 1980, smelting operations closed, and the stack was threatened with demolition. Proud Anacondans banded together, and the stack was saved, becoming a Montana State Park. Only now the Federal DEP has fenced it off, saying that the site leaks arsenic.

Our Lady of the Rockies

Overregulation also rears its ugly head in Butte, where misguided ordinances prohibit drinking its turbid tap water until at least 1993. But it doesn't quench our enthusiasm for two local attractions, the Our Lady Of The Rockies Statue, and the Berkeley Pit.

At 90 feet tall, Our Lady Of The Rockies is America's largest Madonna. She looks down from atop the continental divide, some 3,500 feet above the city. To see her up close, find the Lady of the Rockies Center, in an abandoned church on Main Street. We wait with other zealots until its one tour bus comes down from the mountain. Then we make a two hour pilgrimage. We remember that patience is a virtue, and are glad the espresso is out of our system.

The Berkeley Pit, a huge terraced hole, 1 1/2 miles long and 1,800 feet deep, is right there in the middle of town. It was once the Nation's Largest Truck Operated Open Pit Copper Mine, but operations ceased in 1982, taking with it much of the local livelihood. Thankfully, the visitor's center is still open. The town's best postcard image is the one taken over Our Lady's shoulder, the dead pit below her. 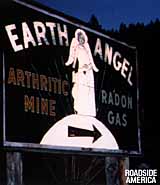 Quietly nestled to the north along I-15 are the towns of Boulder and Basin, headquarters for the healthful radon industry. Arthritics, asthmatics, diabetics, and those with hormone imbalances travel from all over to sit in abandoned uranium mines, and soak up the therapeutic aura.

At the Sunshine Radon Mine in Boulder, for example, a walk to the end of this "Open 24 Hours" tunnel leads us into a large exposed rock game room. Here, visitors casually play cards and Chinese checkers while bathing in the beneficial rays. When we walked in, they all turned in surprise, as if they had been waiting down here since the apocalypse, and were stunned to see more survivors.

We also visit Boulder's Radon Tunnel, Basin's Earth Angel and the crowded queen of the mines, The Merry Widow. Unique keepsakes include Radon Pillows, allowing you to take home that healing feeling. Sorry, pregnant women are not allowed in the tunnels! 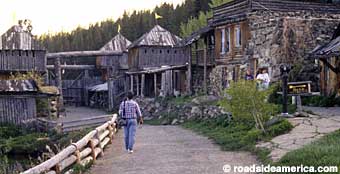 Big sky country gives us enough daylight to get to the forests west of Helena, for a stop at Frontier Town. Frontier Town is the creation of the late John Quigley, who over 33 years single-handedly built this collection of buildings, statuary and artifacts. It features the largest single log bar in the world; its barstools are saddles. One-man constructions are like improv comedy -- coming with a built-in excuse for mediocrity -- but Frontier Town manages to chin the bar. [Update: Frontier Town closed in the 1990s]