The pastoral panorama of Carnation, WA is home of the Carnation Research Farm, and the World's Champion Milk Cow Statue. During the 1920s, Segis Pietertje Prospect's yearly yield exceeded 16,500 quarts of milk and 1,400 pounds of butter -- ten times that of the average cow! Doug agrees with the plaque that says cows "Nobly deserve the title, 'Foster Mother of the Human Race.'" Mike says it's a false pagan idol, and that we should leave. 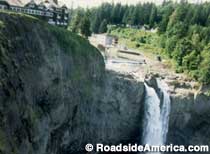 We are excited about hitting our next stops, the Twin Peaks and Northern Exposure towns, Snoqualmie, North Bend, and Roslyn. Seminal '90s "quirk" TV shows filmed here were demographically designed so advertisers could shoot from the hip, hitting our young but family-oriented friends right between the eyes. The roar of the mighty waterfall and scenic overlook at the "lodge" get our Twin Peaks fevers burning. We hope to ourselves that in addition to "The Big Log," resting under Snoqualmie's Historic Log Pavilion, we will be able to see a large tribute to Ernest and Julio Gallo's White Grenache wine, or a fifty-foot prospectus monument under the Fidelity Tax-free Mutual Fund Pavilion.

Nothing like this greets us. Perhaps it is because no one cares about Twin Peaks anymore. North Bend's Mar-T Cafe still sells their famous cherry pies and coffee, but mainly to regulars. Fireplace logs, with tags identifying "Official Log Lady Logs," sit in a pile at the drug store and gather dust. [Note: This report was written only 1 year after the show ended!]

We quickly head to Roslyn, television's Northern Exposure town, where things are slightly more animated. Scads of sweat-suited retirees disgorge from their RVs and wander ugly vistas from NE's opening credits. In the souvenir buying lines, puffball-headed old ladies ahead of us discuss local sales tax differentials with the counter help, while our espresso-massaged forebrains scream for stimuli. 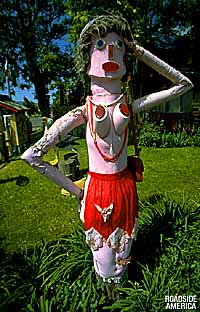 Back on the road to Ellensburg, "Gateway to the Channeled Scablands." Here, across the street from the police station, we find Dick and Jane's Art Spot. Brightly painted wooden figures, bicycle wheel sculptures and bottle cap tesserae decorate this private residence. "big Red," a pink woman with road reflector breasts, beckons near a man with a flash bulb camera face.

As we leave Ellensburg, we see our first camcorder-wielding Dad, like the first robin of Spring, videotaping his children going in the Super 8 motel office.

The flat drive toward George, Washington gives us plenty of time to imagine what funny civic permutations await us there. But the town doesn't get its own joke. Instead of dressing the residents in powdered wigs, or having any kind of photo opportunity that spells out the gag in no uncertain terms (Like a billboard with a hole cut for your head, making you look like a termite in a giant set of George's wooden teeth), all we see at the city limits is a sign reading "Welcome To Town of George." What!? They do sell postcards of the world's largest cherry pie, baked in 1983, at the chamber of commerce. But, man, what a disappointment.

We are behind schedule, and on the dusty streets of George, have a disagreement. Doug wants to go north and see the windmills made of household items in Electric City, and stay for the laser show on the side of the Grand Coulee Dam. But Mike thinks we will waste too much time waiting for darkness to fall before the laser show, and if we go South, we'll not only see more, we'll make it to Spokane before dark to see their stuff, too.

South we go. Loser chooses music, and since we have to proceed with all the speed the law allows, Doug unzips his complete collection of Hawkwind tapes, and pops in a live version of "Sonic Attack." Hawkwind, an early '70s British space rock band that still performs, never did ballads and their songs often end in explosions. Hawkwind's constant 85 MPH drumbeat and pulsing broken white line bass, no matter what the number, offer a much better driving aura than more obvious, less hypnotizing choices like Elvis and Led Zepplin.

Two loud hours later, at the Hanford Science Center in Richland, we learn about the nearby Hanford Site, a Manhattan Project boom town that once produced plutonium for atomic bombs. But the Science Center focuses on boring "don't panic" education, with computer games like "Learn Your Personal Radiation Dose." Brochures teach us that "radiation is emitted by earth, water, food...Radiation also comes from human-generated sources such as color TV sets, medical procedures and nuclear weapons production."

[Update 2005: According to Connie Estep, Curator, the Hanford Science Center "reopened in a different location in 1997 as the CREHST Museum (Columbia River Exhibition of History, Science, and Technology). We still feature exhibits from the Hanford nuclear site but we also have Lewis & Clark, geology, early area settlements, and various short-term exhibits." CREHST Museum, 95 Lee Blvd. 509-943-9000]

Make this stop worthwhile by visiting B, B & M Sporting Goods for a Richland High School T-shirt. Sports teams there are called "The Bombers"; the logo features a billowing mushroom cloud. B, B & M usually sells about 30 a week, "But if the DOE boys are in town, they just fly out of the store."

[Update 2005: B,B & M Sporting Goods is gone, but you can still buy Bomber gear via the school alumni web site. Thanks to Blake Lindsey for the link.]

Horrible two lane traffic makes our race to the Whitman Massacre Site Interpretive Center, just west of Walla Walla, a nail-biter. When a National Historic Site says they close at 4:45, they mean it. Running in just ahead of the door locker, camera tripods akimbo, we find that politically correct forces have reshaped the old dioramas of Dr. Marcus Whitman and his wife, Narcissa, futilely running from tomahawk-wielding attackers, into a scene where food is peacefully exchanged between the couple and their culturally distinct neighbors. Only the recorded messages outside hint at the tourism-rich horror of the 1847 massacre that left 13 dead, buried together in the "Great Grave" at the bottom of the Whitman Monument hill. Doug says, but does not mean, that the interpretive center is as good as laying on the grass, watching lasers dance to Dark Side Of The Moon. 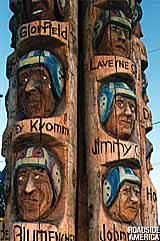 We speed along Hwy's 12 and 127 between rolling green hills, Gaia's attractive pagan buttocks, toward Colfax. Signs quickly direct us to the Codger Pole, a sixty-five-foot tall chain saw sculpture commemorating a 1988 high school football rematch -- played fifty years after the first game by the same participants.

The pole is actually a fagot of five separate wooden columns, with the heads of all the golden-aged players carved into them. Town fathers have done a great job displaying and publicizing the Codger Pole, perhaps because town fathers are the very people portrayed.

324 South Main St., Colfax, WA
Directions:
On Hwy 195, between Pullman and Spokane between two insurance agencies. Look toward the town's concrete riverbed, and you'll see the Codger Pole, centerpiece of a square built around it.
RA Rates:
Worth a Detour

Just north of Colfax, we watch the sun set as we wait with other travelers for patrolmen to clear a jack-knived big-rig off the highway. If we had arrived in Spokane during the daylight, we could have seen the Milk Bottle-shaped Building at Post and Garland, The Bing Crosby Room at Gonzaga University, or even a Check Signed by George Bush on the wall of Patsy Clark's restaurant. But as one of us reminds, and as one of us is reminded, "We didn't, so we can't."